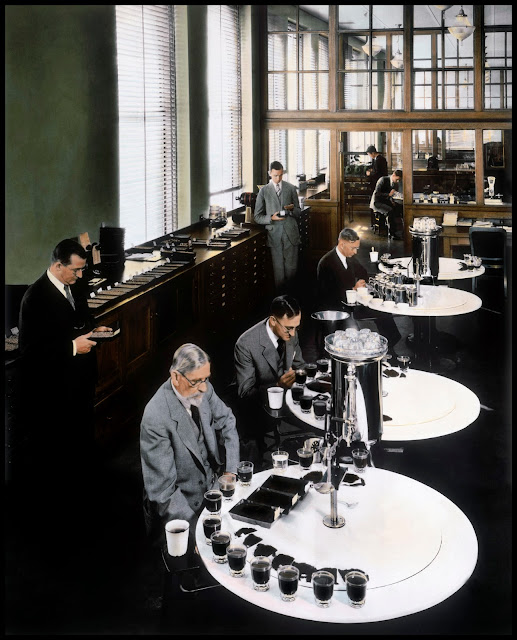 The tradition of quality analysis, innovation and experimentation continues today at the site of
Austin and Reubin Hills original "cup tasting room". This property, built by the Hills Bros. at #2 Harrison, is where vacuum packing and other innovations in the coffee processing industry spurred the explosive growth of their company.  The aroma of roasting coffee from Hills Bros. plant dominated the waterfront experience for generations. The plant and company's executive operations continued through the properties redevelopment in the 1990s while they were owned by the Nestle Beverage Company.  They later relocated to Los Angeles and are now owned by Massimo Zanetti Beverage USA.  Google, Gensler, and Mozilla are now primary tenants.

This photograph shows the company team at the table conducting cup-testing (c.1930), #2 Harrison, led by Reuben Hills, Reuben Hills, Jr., Elliot Cofer, Dick Bennetts, Gene Hoelter and younger members of the Commodities Department.  This testing procedure continues today with highly qualified personnel using the most advanced equipment to augment their expertise in judging coffee quality by taste and smell, although no longer at this location.