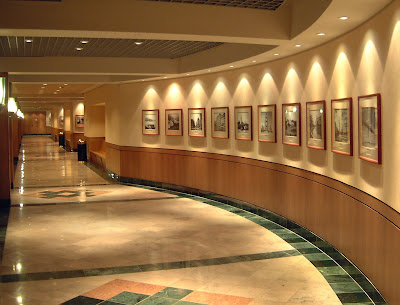 Here is a surprise from the Federal Government- quietly over the last 5 years, working together with local Federal Judges, led by Judge Bryer, we have created the largest permanent local history exhibits on San Francisco and the Bay Area's History. Distributed over 4 floors at the top of 450 Golden Gate Ave, the program details the tales of the City from 1850's through the construction of the TransAmerica Pyramid. Vignettes feature the Panama Pacific Exposition of 1915, the creation of the Bay Bridge, Treasure Island,the 1939 Golden Gate Exposition, the Palace Hotel, the Earthquake and Fire of 1906, the Cliff House and Sutro Bathes, Civic Center, Recreation, Districts around town, the Waterfront, transportation and cable cars, the City's great hotels, notable characters, as well as selected content from others areas around the 9th District the Court serves. Each images has a detailed narrative telling the story behind the picture. Additional programs are installed in San Jose and Oakland Federal buildings.

The program was conceived as a gift to the public from the Court, led by Judge Breyer in San Francisco and Judge Seeborg in San Jose. The intent was to express the integration of Courts with the community, providing education heritage content, foregoing conventional decorative art for the interior walls. Displays are located throughout the public space of the San Francisco and San Jose building, as well as chambers and Jury Rooms. The project started by considering the Jurist experience in the deliberation rooms, which often were windowless.

Each photograph was digitally mastered at highest resolution ensure the restoration of missing details, contract and fading problems, cracks and defects, according to our best practices for historical content.

Many of the images in this exhibit can be purchased economically through our web galleries:
World Wide Archive - San Francisco Galleries

Built on a sandhill, the eight-story Hotel opened in splendor in 1876 as the largest hotel west of the Mississsippi. Two and a half acres in size, with 800 rooms and six of its seven gold-and-white stories decorated in parallel banks of bay windows, the Palace was this boomtown's pride and joy.

______Web galleries where you can obtain prints of Palace hotel images -