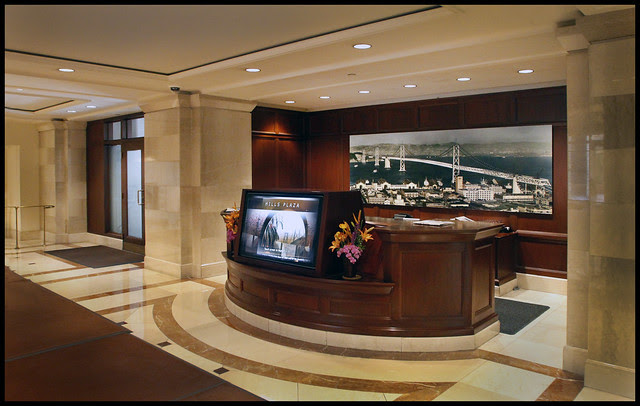 To create this program, we had the pleasure of working with the building's original developer Betawest, Hills Brothers, project architect David Colleen of Whistler Patri, and perhaps most memorably, Carol T. Wilson, the company's historian, who began his career in this building in 1924.

Panoramic Mural
This hand-tinted 12' wide panoramic photograph showing Hills Plaza and the Bay Bridge under construction full size is a one-of-kind photographic print made from the original negative. 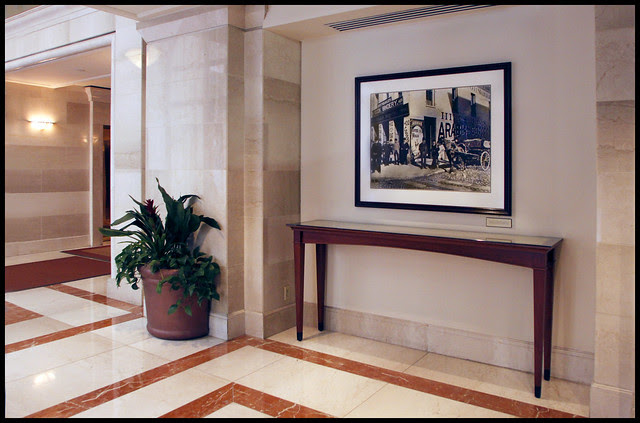 Hills Bros. Arabian Coffee & Spice Mills, was located at the corner of Sansome & Sacramento Streets, serving as both a factory and home office for the growing company from 1884 to 1894.  This site later became the site of the Federal Reserve Bank. 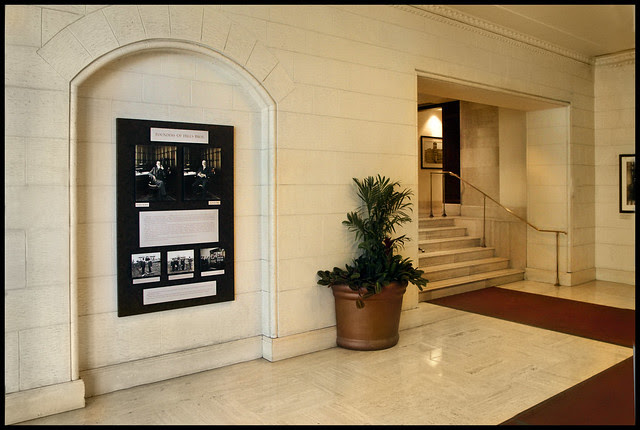 
Hills Bros. was founded February 14, 1878, in San Francisco when two brothers, Austin H. Hills (1851-1933), and Reuben W. Hills (1856-1934), formed a partnership to sell retail dairy products in a stall in Bay City Market located at 1146 Market Street.  Three years later they became owners of Arabian Coffee & Spice Mills. This marked the beginning of their growth to become one of the nation's largest and most notable coffee companies.  Burned out by the San Francisco Earthquake and Fire of 1906, these courageous brothers went on to achieve their destined mark in coffee history.  This building was the home office and plant for Hills Bros. from January 1926 until April 1990, when remodeling began to make this structure a vital part of the new block-square Hills Plaza.

--> The partnership Hills Bros. was incorporated in 1914, but the name was not changed to Hills Bros. Coffee, Inc. until the early 1930's.  These are the three generations of Hills men who directed the daily operations of this 98-year-old family-owned business until it was sold in 1976, later to become a strategic part of the new Nestle Beverage Company. The company was later sold to Sarah Lee in 1999 and was sold to Massimo Zanetti Beverage USA in 2005 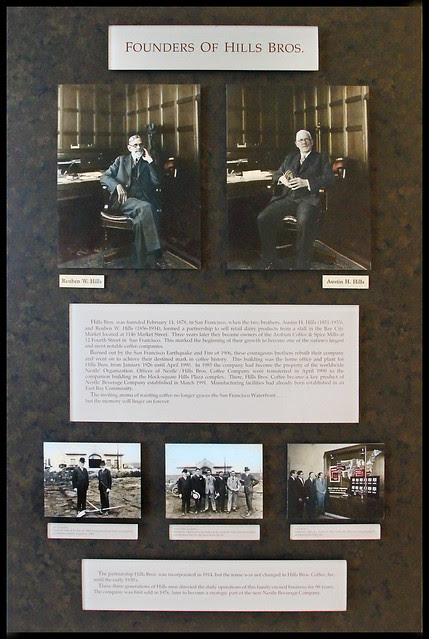 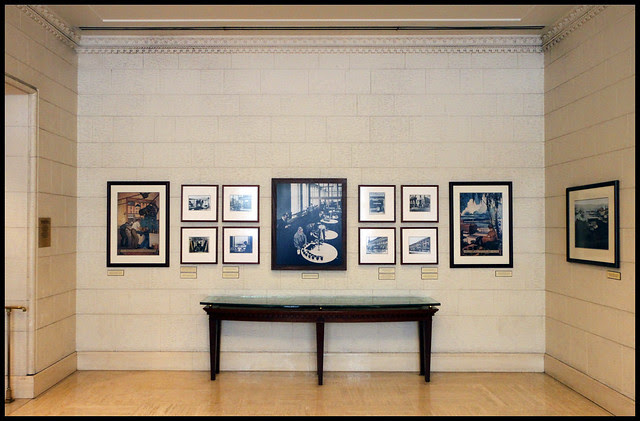 Main Lobby Exhibit, #2 Harrison
This group showcases historical milestones of the Hills Brothers Coffee Company, featuring the famous tasting table a 2 Harrison as its centerpiece, set onto a 4" x 2" solid mahogany backing, flanked by two reproductions of the Holden Murals depicting the history of coffee.  Image on the far right is a 1851 shot of South Beach area showing the future location of the building before the landfill was done. 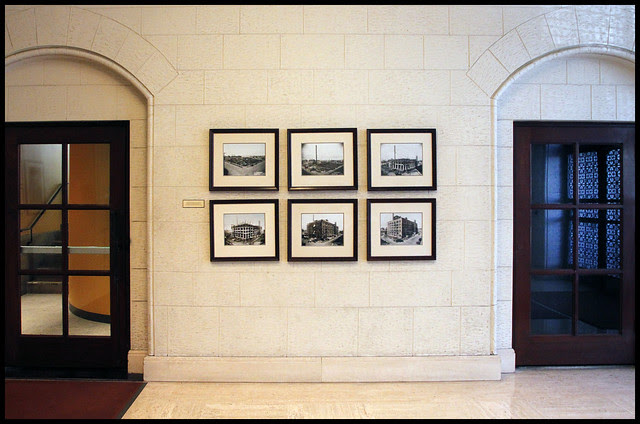 This series shows the construction progress of the 2 Harrison Street plant and offices of Hills Bros. from ground-breaking August 12, 1924, until near completion at the end of 1925.   The architect was George W. Kelham; builder was P. J. Walker Company. 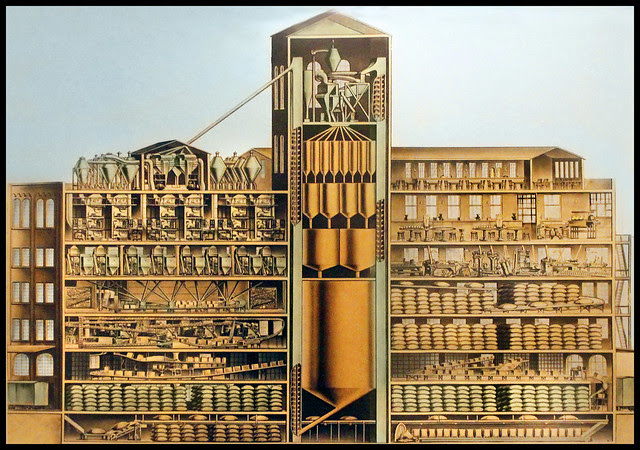 Cross-section Illustration of #2 Harrison showing original operations in the property
This cross-section illustration of the Hills Bros. plant at 2 Harrison Street shows the path coffee beans traveled after arrival in the warehouse until they were blended, roasted and vacuum-packed for shipment.  The orange bins in the center of the Green Coffee Mixing Tower were used in combining various lots of coffee to prepare the final Hills Bros. blend.  The cup testing rooms are at the top right side of the building. 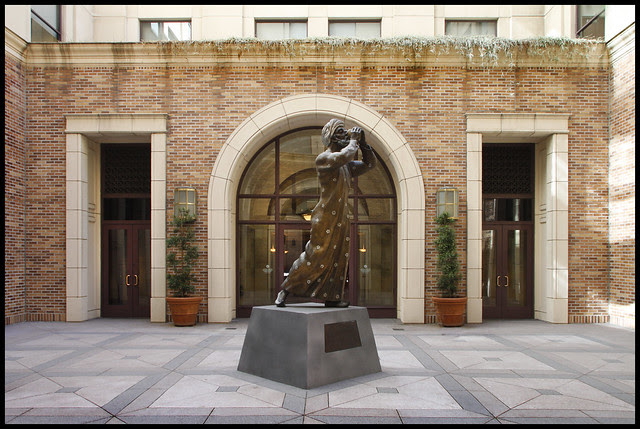 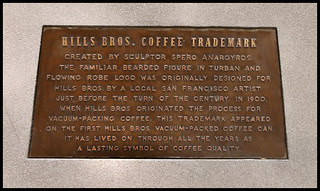 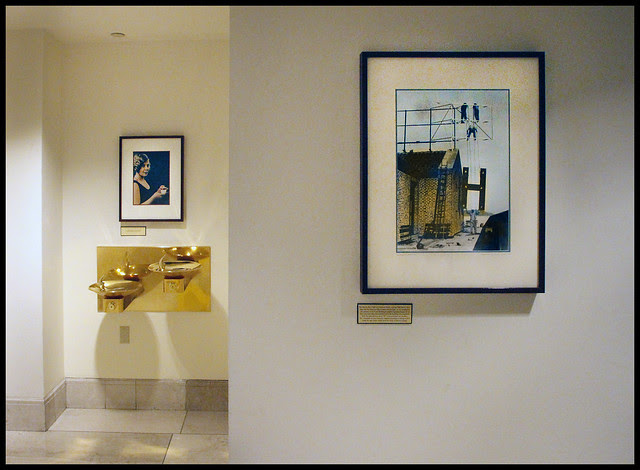 
LEFT: In 1935, the original electric roof sign facing the Bay was converted from incandescent globes to red neon tubing.

More information about our projects with Hills Brothers and Nestle