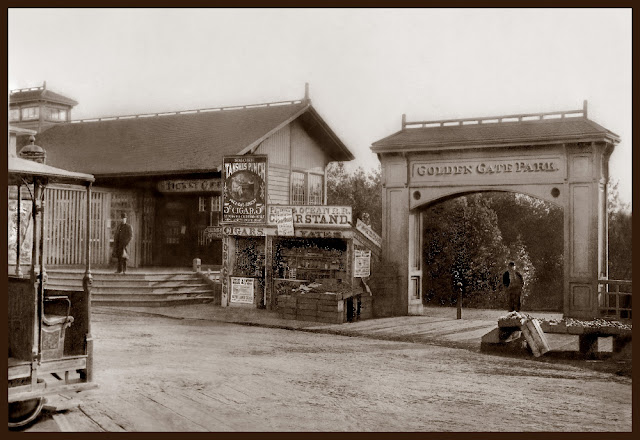 Available through our galleries on World Wide Archive

David Gallagher
there were two different lines with confusing names. one was called the "Geary, Park, and Ocean Railroad" which ran in the Richmond District and this one which was called the Park and Ocean Railroad. this ran from this station (which was in the Park on Stanyan between Haight and Waller) cutting the corner of the park through where Kezar Stadium would be, then down H street (Lincoln Way) to 48th avenue where entered the park and passed through to La Playa where it ended at Balboa. The router though the west end of the park is still there as a walking path.

ahndy Actually the Turn-around for the park and ocean line was at Fulton and 5th: www.cablecarmuseum.org/co-geary-st.html


David Gallagher PRO 5y
ok Langley's 1890 map (from the David Rumsey Collection) shows a building on the west side of Stanyan at Haight -www.davidrumsey.com/luna/servlet/s/20362k

and here's something else from the market Street Railway blog atwww.streetcar.org/blog/2003/07/streetcars-in-the-sunset-t...


In 1883, the Park and Ocean Railroad established the first viable means of access to this desolate area, building a steam railroad from Haight and Stanyan (where the cable car line from the Ferry Building ended) along H Street (now Lincoln Way) almost to Ocean Beach, then north through the western edge of Golden Gate Park into the outer Richmond District, ending at B (Balboa) Street. This steam route was electrified in 1898, and by 1902 was operated by conventional streetcars.


so, I'd say that our suspicions are correct, and that the car on the left is a Haight Street cable car from downtown