My Perch on Sutro Tower - The top of San Francisco 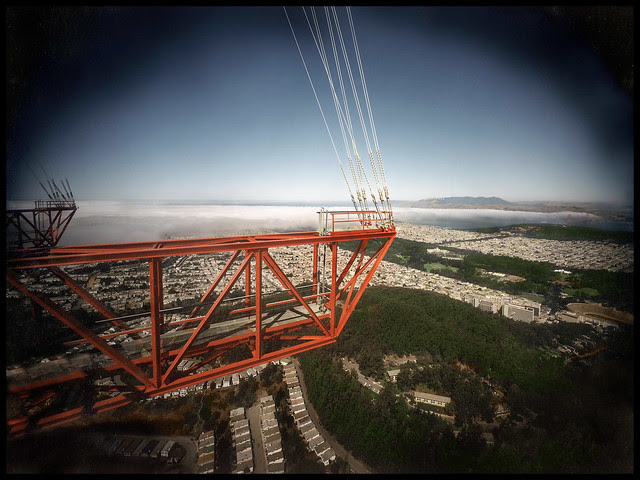 Something with a little vertigo anyone?

Imagine the grinding of metal gears, scrapping of metal on metal siding, snapping and popping as they engaged thankfully, one by one, thus enabling a painfully slow but necessary ascent inside one of the three metal legs of Sutro Tower.  Looking out mid-climb from the man cage, an emerging vanishing point fortold the vertigo enducing future that was a mere 15 minutes away as the elevator slowly took us toward the non-aviation related highest perch in San Francisco.

Not content for the simple experience however, we had decided to lug of all things an 8 x 10" view camera , one of those Ansel Adams size monster cameras that would capture images that could be blowup the size of a house.  What were we thinking?  Oh yes, it was 1984 and we did things like this back in the day.

Once we summitted, there was suffice to say some further adjusting to do.  First and foremost, as you step off the man cage, you realize that your walking platform is see-through expansion metal-grating.  This means, if you chose to look at your feet, you are also staring straight through your new 'floor' roughly 750 feet to the cement deck below.  This is a bit unnerving. You get used to it. Thank god for the hand rails. 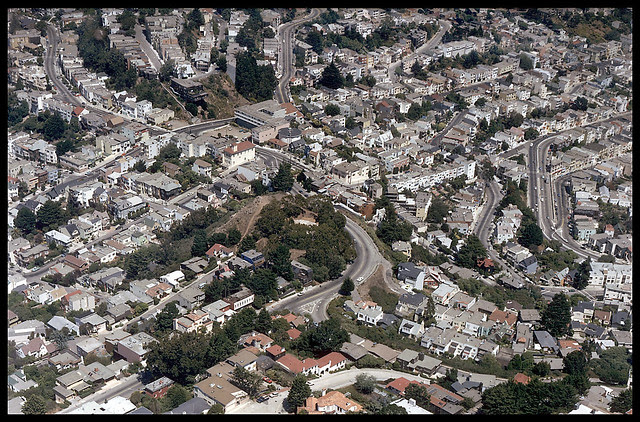 Next up, because I simply must get the best possible shot and view, that bloody giant camera had to be the hoisted up and out onto the most outer perch of the prongs of this alien-like antenna tower.  Yes, that means ropes and more vertigo and realizing that in addition to the visuals, that this entire contraption swayed in the wind. Only common sense and knowing that it was still standing after all these years made it possible to ignore the fear that otherwise would have quashed our sense of adventure. 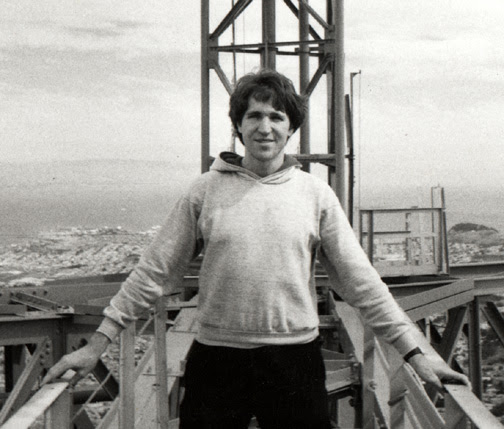 Your truly back in the day

Now we were at our finale.  Rest assured that the view is worth it - and, there was something supremely surreal and extraordinarily exhilarating about dangling our feet off the edge of this perch and contemplating the City and Bay Area expanding in 360 degrees in all direction.   This was indeed a grand place to live and the ultimate view point.  By the end of the day, the wind gradually moved from gentle to hurricane force. Same time, we started to feel our genetic material being altered by the distinct buzz of the radio waves. In an abundance of caution, we realized it was time to retreat, and enjoy another fifteen minute long man-cage decent back to the normal terra firma of the City...

History: from Wikipedia
Named after Adolph Sutro, a businessman and former mayor of San Francisco who had a mansion located about 100 feet away from where the tower is now located, the tower stands 977 feet (298 metres) above the ground and 1,800 ft (549 m) above sea level. It is the tallest structure in the city, surpassing the 853 ft (260 m) Transamerica Pyramid by more than 100 ft (30 m). In addition, it is built on one of the highest peaks in the city, the old site of the Sutro Mansion owned by Adolph Sutro's descendants.

The facility is easily accessible by car and the site offers beautiful panoramic viewpoints of San Francisco, and there is a platform near the top of the tower, 762 ft (232 m) above ground. Authorized maintenance workers access the tower by a small two-person elevator that runs inside the west tower enclosed leg.
Posted by Unknown at 12:33 PM No comments: 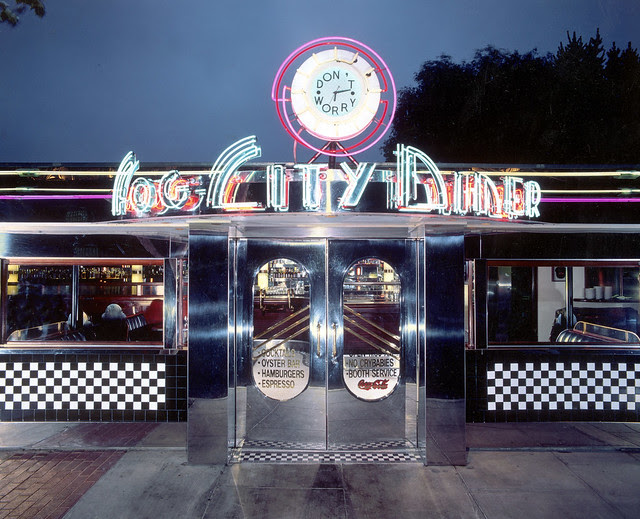 Driving by the 're-manufactured' Fog City Diner, fully modernized to 2013 aesthetics and no doubt the latest culinary best practices, I found myself missing its original gleaming chrome, the design genius from its launch at this prime Embarcadero location across from the San Francisco Bay Club.  OK, it was originally the Mildred Pierce, a favorite haunt for the "Mad Men" of San Francisco back in the 70's and 80s prior to Fog City's original birth June 12, 1985.

The legendary Herb Caen went to the grand opening of Fog City Diner and proclaimed its white hot nature in his famous column:

"Another day, another new restaurant. These things cost big bucks and are a high-risk business, but I guess when they pay off they pay off big. I know a lot of rich restaurant owners and several who died multimillionaires. Wednesday night’s kickoff was for the Fog City Diner, owned by the three people (Bill Higgins, Bill Upson, Cindy Pawlcyn) who made a winner out of Mustard’s in the Napa Valley. This one’s at Battery and the Embarcadero, on the spot where two earlier places died – Mildred Pierce’s and Battery Point – but I think they got it right this time. The diner is a stylized super 20th Century Limited “car” that cost half a million in chrome alone. In the fog, which was thick Wed. night, the Fog City Diner looks ready to roll. I think you’ll need reservations.

Well said but is this an improvement?

I am sure it is better for business, and for those of us that study historical preservation it will always bring up the questions as to whether demolition leads to a better experience, asking what should we save, when and why.

What do you think of the change at Fog City?

Bill Higgins said the “diner” concept has had its run and Pawlcyn left over a decade ago. Higgins says, "the concept isn’t commensurate with current dining expectations."

Full Disclosure:
Back in the day,  those of us, known at the time as the "Three Amigos" did admittedly frequent the Fog City Bar after a grueling workout playing badminton at the Bay Club. OK laugh. But, if you ever played serious shuttlecock you would know that this involved serious sweat. Anyway, this led us to the world famous Billy Berger, his hijinks in general, the Knights of Knee, popular at the time, and the best Mai Tais on Earth and and the correctly named "Tim and Tonic", after Tim Hill naturally, and eventually, a eventually a bronze plaque, appropriately nailed to the bar upside down in our honor.  The Three Amigos are long gone, but not have not forgotten. Such is the nature of the "Bar in San Francisco", an experience with countless thousands of stories over nearly hundreds of years now, all with variations on a similar theme. PS, we were always successful at "working off the work out" at Fog City - they Delivered in spades - Thanks Billy Berger(sp), Nancy Hahn, Bill Higgins, Ty Joseph wherever you may be and everything Fog City.

PHOTO NOTES: Some decades ago, I shot this exterior view of the Fog City Diner, at the time commissioned by founder Bill Higgins, for a promotional postcard.  The final was actually a hand-tinted version of this view. 6 x 7cm old school transparency film of course.

Reference:  Waterfront History of San Francisco
Posted by Unknown at 5:59 PM No comments: