HAPPY HOLIDAYS! The story of the Tree in Union Square 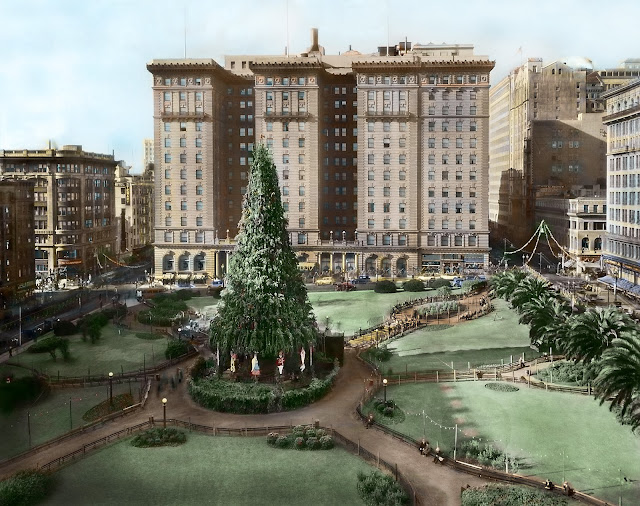 Since 1880, and every year since, a magnificent tree or a facsimile or creation resembling a tree, has adorned Union Square during the holiday season. This annual tradition has, like many things in the City's history, been credited to Emperor Norton (1818-1880), who it is said, in his normal fashion to such matters, simply decreed that this shall be done.   Norton, the City's great eccentric, has also been noted as the first person to envision bridges across the bay, not to mention he is a man who created his own currency.  Apparently, this was also the first public-space Christmas tree in the country.

REFERENCE:
Click here to order a print of the Tree in Union Square


The tree in this photograph is apparently not be tree, rather it is a work of landscaping artistry that surrounds and adorns the monument, using its structure to create the form of a tree.

TODAY: For many years the trees cut for the Square were real - however starting in 2011, as no one really wanted the cut tree after the season, the decision was made to shift to an artificial tree.   This Story explains the details of the 17 1/2 ton 86' high creation adorned with 33,000 LED light bulbs. 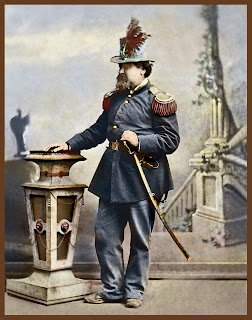 The Emperor in full regalia

Union Square's name originated from pro-Union rallies held on the eve of the Civil War. Built on what was originally a sand dune, the Square became a public park in 1850.

Learn more about first Emperor and his important decrees

Order a print of the Emperor Union Square, the center of the City in pioneer days, was deeded for permanent public use on January 3, 1850 during the administration of John White Geary, San Francisco's first mayor and postmaster. The 97-foot Corinthian column is topped by a figure representing Victory. President Roosevelt dedicated the Monument in Union Square to honor the victory of Admiral George Dewey and the American fleet over Spanish forces at Manila Bay, the Philippines in 1898, during the Spanish-American War. The Monument is also a tribute to the U. S. Navy sailors.

Source: (Tree shot) Oakland History Room, Oakland Public Library, digitally mastered by San Francisco Images / Business Image Group.  You can acquire copies of these images framed and unframed through our World Wide Archive Web Galleries. A portion of all sales will be donated to the History Room to assist them with their work preserving local history and to maintain their collections.

Can you help me date this picture? 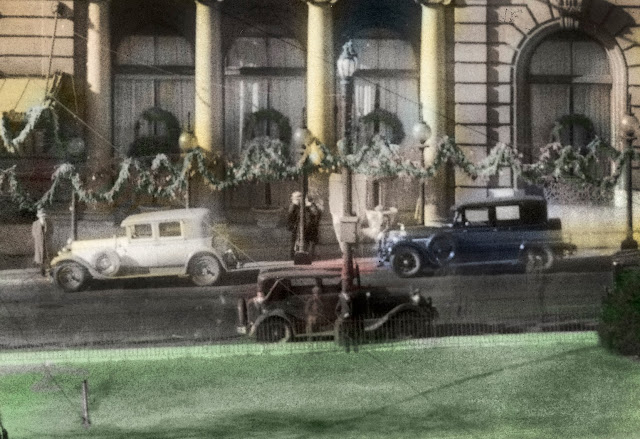 There is a question as to the date of this view - the image below shows details of the cars in from of the St. Francis Hotel -  Do you know a vintage car buff who could advise as to the makes and model / years so I can confirm the date.  If you know- please comment / send me an email.

The Emperor also was the first to foresee and ultimate decree that a Bridge should be constructed across the Bay - here is his original declaration on the matter:


WHEREAS, we issued our decree ordering the citizens of San Francisco and Oakland to appropriate funds for the survey of a suspension bridge from Oakland Point via Goat Island; also for a tunnel; and to ascertain which is the best project; and whereas the said citizens have hitherto neglected to notice our said decree; and whereas we are determined our authority shall be fully respected; now, therefore, we do hereby command the arrest by the army of both the Boards of City Fathers if they persist in neglecting our decrees. Given under our royal hand and seal at San Francisco, this 17th day of September, 1872


If you like what you see here and would like to help support local history, please become a member of the Oakland Public Library History Room.(Oakland History Room)