Over 3000 deaths were caused by the catastrophe, primarily in San Francisco. The population of San Francisco at the time was about 400,000, and over half were rendered homeless. 28,000 buildings were destroyed. 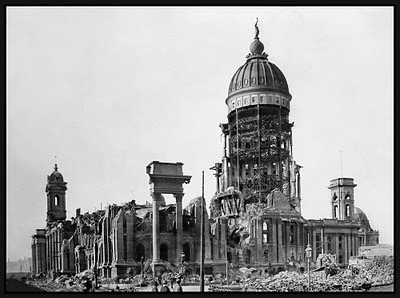 City Hall, from corner of Ninth and Market, after San Francisco Earthquake and Fire, April 18, 1906

Something was not quite right about the engineering of San Francisco's City Hall. When the Quake came in 1906, the structure came apart at its seams. 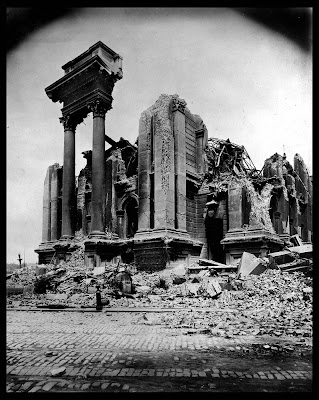 The new $6 million building, which had been under construction for 20 years, was considered by some to be more noble as a ruin. Entire walls crumbled and massive stone columns fell into the street, leaving the relatively intact dome oddly perched above the twisted debris. 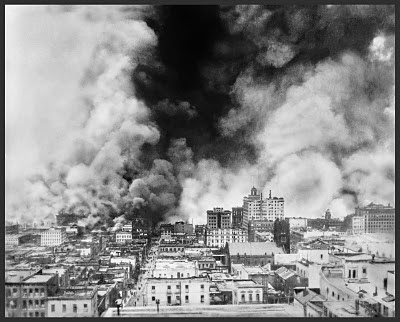 Fire Burning after the Earthquake, April 1906

Multiple fires swept the City for four days, erupting from damage to gas lines and electric wires, fueled by the wooden debris. The City's water system had not been upgraded to cope with a major fire threat and key water mains were broken, leaving the hydrants empty. Many buildings were dynamited, as recouted by General Funston to create firebreaks - drawing on dynamite supplied by the California Powder Company, whose leading brand product became the namesake of the town of Hercules. 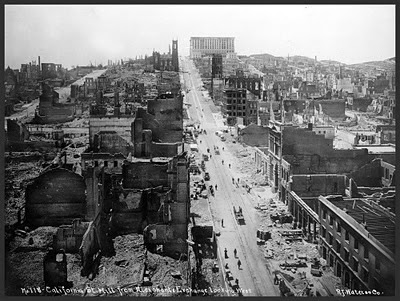 The Earthquake and fire of 1906 left over 10 million cubic yards of wreckage that had to be cleared before reconstruction could begin. The business district and three-fifths of the entire city was in ruins, and damage was estimated at $500m. The Fairmont Hotel, at the top of the hill, was about to debut at the time of the earthquake. 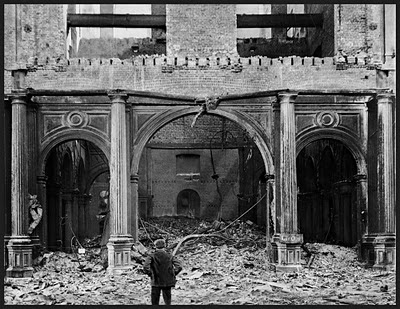 Palace Hotel's entrance after the Earthquake and Fire, 1906

The Palace suffered only moderate structural damage in the Earthquake, due to the efforts by William Ralston to make it earthquake resistant. However the "fire-proofing" efforts were a total loss. Artesian water stored in roof top and basement tanks was exhausted well before the fire could be contained. Rubble from the building was later dumped in the Marina area as fill. 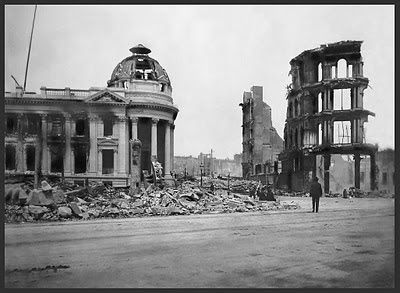 Ruins of Hibernia Bank Building, Market and Jones Streets, after the 1906 Earthquake

Wreckage of the Hibernia Bank Building, Jones and McAllister streets. This view shows the McAllister/Market Street-side of the structure. This building was repaired, and temporarily housed the Harbor Police Station after the earthquake. It was restored to bank use, and again became a police substation when the Hibernia Bank closed in the late 1980s. 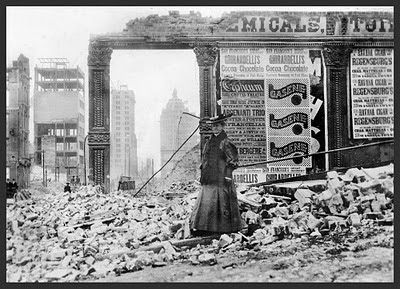 To acquire reproductions of these and other San Francisco Images-visit our Web Galleries
http://worldwidearchive.imagekind.com/store/custom.aspx/83/San_Francisco
Posted by Unknown at 2:09 PM No comments: