Back in the 80's a project came together to light the Palace of Fine Arts, the lone remaining stucture from the Panama Pacific International Exhibition of1915, led by Gina Delacetia.  Bob Pritikin, the City's rather flamboyant adman and hotelier came together to create promotional and funraising events and stunts - leading to a our producing a series of life size super-realisiic portraits of notables around town wearing Beach Blanket Babalon hats, steve Silver organized around the effort 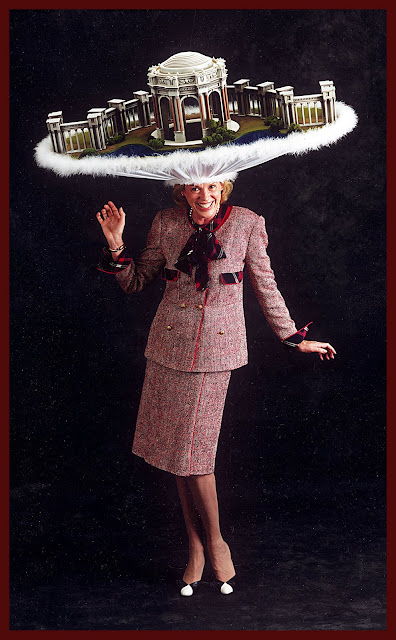 Phoography was done with the 8 x 10" view for ultra high-resolution - every thread in the fabric sharp as a tack.  The originals cut outs are not at the Bob Pritikin Mansion on Chenery Street - pending become part of the City Museum there proposed by Pritikin

http://en.wikipedia.org/wiki/Charlotte_Mailliard
Posted by Unknown at 11:29 PM No comments:

Cyril Magnin greets his guests to his birthday bash

For Cyril's last Birthday bash, I had the pleasure of photographing him with my then trusty 8 x 10" view camera. He never questioned the size of the camera or the use - but a plan was under foot. Later in the darkroom - we made two larger than life cut-outs of Cyril - this one greeting guest as they arrived at the function over the awning of his long time residence, the Mark Hopkins Hotel. Here's to you Cryil! This town is just not the same without you. 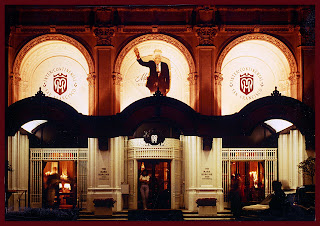 
Cyril Isaac Magnin (1899–1988) was one of the most prominent San Francisco businessmen of the post-World War II era, chief executive of the Joseph Magnin Company, which evolved into a multi-million dollar chain of upscale women's clothing stores.

Personally gracious and urbane, Magnin was a veteran political fund-raiser and power broker in the Democratic Party, dating back to New Deal days. He was Treasurer of President Franklin Roosevelt's northern California re-election campaign in 1944, a delegate to the Democratic National Convention in 1948 (that nominated President Harry Truman) and again in 1964, when he co-chaired the Finance Committee of President Lyndon Johnson's campaign in California.

Throughout the 1950s and 1960s, Magnin was one of a quartet of fabulously wealthy San Francisco Jewish contributors to Democratic candidates, appreciatively called "The Green Machine" by career politicians[1], the others being Fairmont Hotel magnate Benjamin Swig, Lilli Ann clothing company founder Adolph Schuman, and real estate mogul Walter Shorenstein.

The four did not always agree in their choice of candidates. Magnin himself was a major donor to the presidential candidacies of John F. Kennedy in 1960 and Robert F. Kennedy in 1968, and, in the interim, developed a close friendship with Lyndon Johnson.[2]

Magnin was the first of the "Green Machine" multi-millionaires to fade from the national political scene after the Party was bitterly divided over the Vietnam War in 1968 and 1972. But he later worked closely with San Francisco Mayor Joseph Alioto and was deeply involved in the civic affairs of the city for the remainder of his life. He was President of the Port of San Francisco and was instrumental in establishing such internationally-renowned institutions as the Asian Art Museum, the American Conservatory Theater and the California Culinary Academy. Serving also as the city's first "Chief of Protocol", Magnin reveled in the informal title of "Mr. San Francisco".
Posted by Unknown at 11:08 PM No comments: