Home movie footage of the Sky Tram by Ron Biagini in 1960. The Sky Tram ran next to the Cliff House over Ocean Beach in San Francisco's Richmond District. Video includes shots of the installed double waterfall and broken windows of the Sutro Baths building.

North Beach from the top of the hill 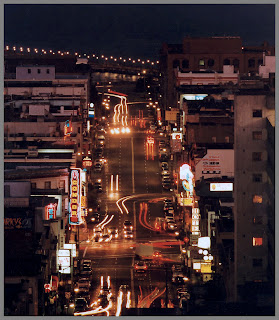 Originally, the city's northeast shoreline extended only to what is today Taylor and Francisco streets. The area largely known today as North Beach was an actual beach, filled in with landfill around the late 19th century. Warehouses, fishing wharves, and docks were then built on the newly formed shoreline. Due to the proximity of the docks, the southern half of the neighborhood south of Broadway was home of the infamous Barbary Coast.

Due to its past legacy as the Barbary Coast, Broadway east of Columbus, grew to be the home of the city's red light district and striptease clubs. The Condor Club, on the corner of Columbus and Broadway, was opened in 1964 as America's first topless bar to which it still is as of today. The Lusty Lady, a peep-show establishment, is notable as the world's only worker cooperative strip club. The Broadway strip was also home to the Mabuhay Gardens, the Stone and On Broadway nightclubs, which were important venues in the punk rock scene of the late 1970s to mid-1980s...from Wikipedia
Posted by Unknown at 11:25 PM No comments: 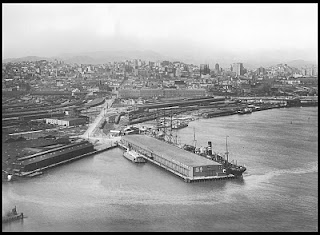 China Basin building and City Skyline in the background, viewing what will become McCovey Cove
http://en.wikipedia.org/wiki/McCovey_Cove

wikipedia background:
Just beyond the wall is a public waterfront promenade, where fans can watch three innings of a game through the wall's archways, free of charge, albeit with a somewhat obstructed view. Across the cove from the ballpark is McCovey Point and China Basin Park, featuring a statue of McCovey at the mouth of the Cove. At his feet are small plaques commemorating the winners of the Willie Mac Award, named in McCovey's honor. Along the southern shore of the cove, between McCovey Point and the O'Doul Bridge, is a walkway featuring plaques showing the Opening Day Roster of every Giants team from 1958 through 1999. Just south of the statue is Barry Bonds Junior Giants Field, a t-ball sized baseball diamond. [2]

Splash hits are officially recorded only as Giants players who have hit home runs that have landed in the cove on the fly. As of August 29, 2009, 50 "Splash Hits" [3] had been hit into the Bay by Giants players since the park opened; 35 of those were by Barry Bonds. The only Giants other than Bonds to have done it more than once are Felipe Crespo (in 2001), Michael Tucker, Ryan Klesko, and Pablo Sandoval. 7 other Giants' players have accomplished the feat just once.
Posted by Unknown at 11:11 PM No comments: