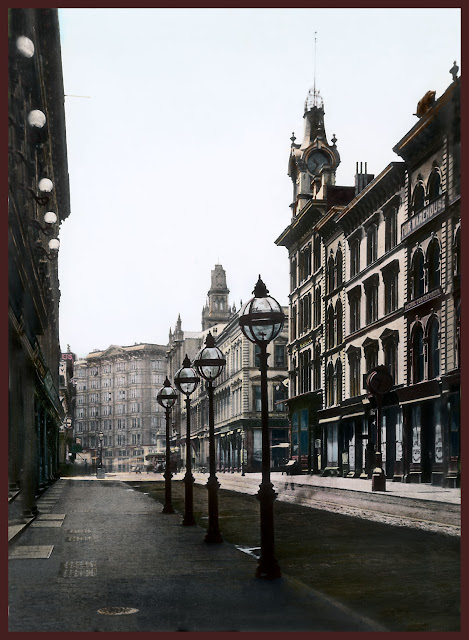 Gas Lamps lined Montgomery Street in a City that rival the European Capitals it style and elegance.  Viewing toward Market Street, the marble clad Palace Hotel completed in 1876 was the largest hotel west of the Mississippi.  Another leading hotel, the Lick House, corner of Montgomery and Sutter streets, is visible through the row of ornate street lamps.

James B. M. Crooks installed the first street lamps in San Francisco on Merchant street in October, 1850. They were oil burning and funded by private subscription. By 1852, Crooks had led the development of ninety lamps covering Montgomery, Clay, Washington and Commercial streets, again privately funded.  regretfully , apart from four posts a fire on May 4th in 1853 destroyed the initial work.  In the autumn of 1852, the common council contracted with Mr. Crooks to light the city within the limits of Battery, Kearny, Jackson and California streets. This contract was carried out until the introduction of gas as above related, by a contract made with Mr. James Donahue for the “San Francisco Gas Company.” About 30 years later, this is what Montgomery looked like as the new Palace Hotel was set to open in 1909.